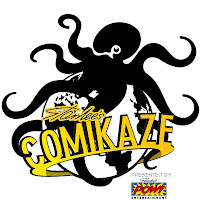 Yes, the Mistress of the Dark herself will be front and center at the newly branded LA Comic Con.

Much like comic legend Lee, horror legend Cassandra Peterson (that's Elvira) was an honored guest at the inaugural show last year and will now be a featured part of the event. In fact, she's helping plan some of the festivities.

"I'm thrilled to join forces with the great Stan Lee in becoming a part of Comikaze Expo! Finally, a first class pop culture convention in my hometown of Los Angeles! " says Peterson. Stan Lee's Comikaze CEO Regina Carpinelli stated, "Elvira is part of our pop culture history. Not only is Cassandra Peterson a pretty face, but she is also brings so much to the table. She's one of the most brilliant businesswomen of our time, and has some fantastic ideas. I am so proud to call her our Partner. I like to think of her as Mistress of the Board" Peterson, who retired from appearing at Conventions as Elvira. Will be dressing as her famous character for Stan Lee’s Comikaze.  “Stan Lee’s Comikaze, is the only convention in North America where you can get a photo or meet with Elvira. How cool is that?” says  Carpinelli.Peterson and the Stan Lee's Comikaze team are launching an interactive webseries/film festival for the show taking place September 15-16th. Elvira and Peaches Christ's Horror Hunt will be akin to American Idol-and Mystery Science Theater 3000.  Aspiring and amateur filmmakers will submit their videos to Comikaze. A team of judges will evaluate them, and the top 10 will be picked-or panned by Elvira and her co-host, Peaches Christ on the hilarious new web series, Horror Hunt.  A final winner will be chosen and flown out to LA. The winner will also receive a red carpet premier at the historic Vista Theater, as well as an official screening at Stan Lee's Comikaze Expo. They will also be featured as a guest at Comikaze.Elvira and Peaches Christ's Horror Hunt will revolutionize the way film festivals are seen.In conjunction with Horror Hunt,  Stan Lee's Comikaze Expo has also launched The Search for the Next SuperHero and Villainous Villain, an art contest promoting creativity and budding artists. They have also announced a  partnership with Star City Games, Americas largest Magic The Gathering tournament company. Stan Lee's Comikaze Expo will hold a Magic The Gathering tournament, with over $20,000 in cash prizes. All contests and competitions are open to the general public and more info can be found at www.comikazeexpo.com

Also featured at the show will be the always awesome creator of Spawn, Todd Mcfarlane. He'll be a guest of honor at the event. There's more that's yet to be announced as well, so stay tuned true believers.