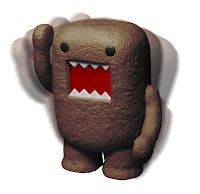 Attention all Domaniacs- brand new Domos are marching their way to retail shelves this year courtesy of Mezco!

The toy maker just signed a deal to produce toys like bobbleheads, action figures, and wind ups (yay!) based on the popular character. Domo is a hugely recognizable image the world over thanks to his being the mascot for the Japanese broadcaster NHK. The adorable little fur ball has been a favorite of young and old alike for years, and they just can't get enough of him.

“The Domo fanbase is always hungry for new and exciting collectibles featuring our brown fuzzy friend,” said Rich Maryyanek, Chief Marketing Officer, Big Tent Entertainment. “This new line really captures the essence of the character and that was very evident in the looks of the faces of those at Toy Fair. We can’t wait for the public to have that same amazing reaction.” 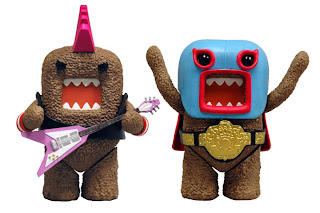 I had the chance to play with some of the new toys that Mezco will be offering and I can tell you that there's some very neat stuff coming. There's pretty much something to like for anyone who wouldn't mind having a few small, gaping mouthed, monsters around the house... and isn't that everyone? Look for the lineup to chomp on retail stores and online outlets this Fall and check out the Facebook game 'Planet Domo' by heading to apps.facebook.com/planetdomo
Posted by Jessica at 3:17 PM