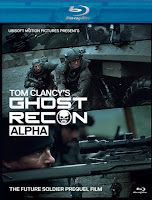 
Titled Ghost Recon Alpha, the DVD (or Blu-Ray) will hit day and date with the game at retail- May 22nd.


After a decade-long manhunt, U.S. Intelligence has received new intel on Chevchenko, a mastermind of the world’s most heinous war crimes. Linked to Russian ultranationalists, Chevchenko is about to deliver a dirty bomb large enough to contaminate Moscow for centuries. Enter the Ghosts, the U.S. Army’s most elite Future Soldiers.  These precision-trained and lethal human weapons are armed with the most devastating high-tech combat systems, and they are tasked with taking out Chevchenko and stopping this international catastrophe before it erupts. On May 22, New Video’s Flatiron Film Company will release Ubisoft Motion Pictures’TOM CLANCY’S GHOST RECON ALPHA® on DVD and DVD/Blu-ray combo day-and-date with the release of Ubisoft’s highly-anticipated Tom Clancy’s Ghost Recon Future Soldier video game for Xbox 360® video game and entertainment system from Microsoft and the Sony PlayStation®3 computer entertainment system. TOM CLANCY’S GHOST RECON ALPHA* boasts a line-up of top Hollywood talent.  The film was directed by Academy Award winners Hervé de Crécy and François Alaux, who won an Oscar in 2010 for Logorama, and produced by Rhea Scott for Little Minx. Tim Sexton, 2010 Academy Award nominee for Children of Men, and Gregory Pruss, longtime writing collaborator with David Fincher, wrote the gripping script. The film was shot by District 9 cinematographer Trent Opaloch; edited by Pietro Scalia, two-time Academy Award winner for Black Hawk Down and JFK; with sound effects and sound effects editing by Per Hallberg, two-time Academy Award winner for The Bourne Ultimatum and Braveheart as well as Michael Mann’s Heat; production design by Jan Roelfs (Gattaca, Alexander); and costume design by Sammy Sheldon (V for Vendetta, Kick-Ass, X-Men: First Class, Black Hawk Down).  Military Weapons Specialist Harry Humphries, consultant on such notable action films such as Transformers, Thor, Iron Man and Armageddon, ensured that the futuristic weaponry in the film was entirely realistic. TOM CLANCY’S GHOST RECON ALPHA* is the 25-minute prequel film to the video game Tom Clancy’s Ghost Recon Future Soldier and follows the Ghosts as they are dropped deep behind enemy lines in order to eliminate one of the world’s most sought-after war criminals. DVD/BD bonus features include the producers’ 2010 Comic-Con teaser and a “Making Of” featurette. Ubisoft’s Tom Clancy’s Ghost Recon brand launched in 2001 and the franchise has sold more than 18 million video game units worldwide. This is Flatiron Film Company’s second Ubisoft release, following ASSASSIN’S CREED: LINEAGE (November 2011).

The combo Blu/DVD will run you $14.95 USD with the DVD all by itself costing only $7.95 USD; you can expect to get about 50mins of entertainment out of the little package, which includes the extras.
Posted by The Angry Spark at 12:06 PM