Nary a year without a Spider-Man (or Spiderman, if you're a lazy typist) proclaimed Activision! And it was done...

Spider-Man: Edge of Time has officially been announced to be coming this fall from Shattered Dimensions developer Beenox. That last part should make Spidey fans happy as SD was one of the most well received Spider-Man games in a long time and just oozed charm (and production values). It also oozed something else- Spider-Man 2099. 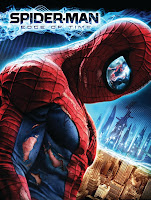 Although the game featured three additional Spidey's (to the main Amazing Spider-Man storyline) from alternate times and realities, it was the Spider-Man from the year 2099 that grabbed players most. The 2099 series of books from publisher Marvel has been defunct for a while now, but fans haven't forgotten.

And future Spidey, you've got star quality. Edge of Time may not jump through dimensions, but it does jump through time.


Spider-Man: Edge of Time is a focused, action-packed adventure set in two connected and evolving timelines, from the contemporary times of the Amazing Spider-Man to the corrupted future world of Spider-Man 2099, against the backdrop of a rich, tightly crafted narrative by acclaimed Marvel veteran Peter David (co-creator of the comic book series Spider-Man 2099).  The game features all-new "cause-and-effect" gameplay, where players will see how the immediate and sometimes unexpected effects of their actions as one Spider-Man changes the timeline of the other Spider-Man.   Spider-Man: Edge of Time is slated for release this fall.

Sound good? Full release after the break-
Posted by The Angry Spark at 11:32 AM