The Mortal Kombat Kollector's Edition packs a load of stuff into one little bitty box just for you! Maybe not just for you, but you get the picture- 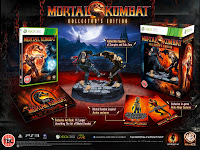 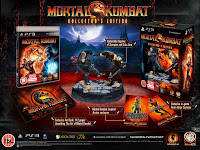 The first thing you'll notice is that these boxes have the Euro PEGI rating stamped on them- that's because they're the Euro editions of MK. But have no fear, the collector's edition of the US version of the game should be similar- if not identical.

Edit- similar it is then! The US edition has an action figure in place of the statue.
Posted by The Angry Spark at 12:00 PM