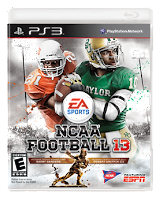 The second half of the NCAA Football cover has been chosen for this year's edition- and joining Robert Griffin III will be none other than...
...legendary running back and Heisman winner Barry Sanders.

There were quite a few top tier players in the overall bracketing, but the likes of Herschel Walker and Doug Flutie were no match for the fan favorite Sanders. Players were voted through the tournament, which kicked off last month, completely by the fans with the winning legend joining modern great Griffin III.

But the pre-release story isn't over just yet. EA Sports will be posting additional details leading up to the full game's release on July 10th. Featurettes will run through June 11th on the game's Facebook page here. Here's what's in store for fans: