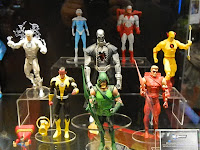 DC comics fans are about to feel the pain Marvel fans went through when Legends switched companies. The difference here is that, while ML moved from Toy Biz (who knew what they were doing) over to Hasbro (who were clueless), the DC license is staying put at Mattel.

It might sound ridiculous at first, but basically the Matty company is going to take a year off from the property (except for Infinite Earths) to better get a handle on its current situation. Where that leaves the proposed first series of DC Universe All Stars (the DOA successor to Classics) is anybody's guess. DC Universe Classics though, was one of the greatest comic book inspired lines ever- and that's no exaggeration. It's basically a fight for #1 and #1'a' between it and the legendary Legends series. So how could it fall from grace?

In a word- sales. The sales of DC Universe Classics were dropping pretty fast, and that's most likely due to a bunch of factors. First and foremost though, the pricing has gone up on the line. While fans and collectors would love to blame Matty for this, it's not entirely their fault and it's not really fair to lay the blame in that way. When material costs go up, so must the end product's price tag. It's not rocket science we're talking here.

For a company to stay in business, they have to either pass rising costs on to consumers or stop offering the end products. Simple. They're not going to sell at a loss, or even a 'push'- why would they? Why be in business at all if you're not going to make profit? See my point?

So there's that... but then there's also the fact that the stable of characters has dwindled and most of the big guns that DC has to offer were already produced. For a line (much like Marvel Legends) that prides itself on comic accuracy (which means no 'Arctic Assault Batman' figure), that's a pretty hefty blow in and of itself.

Now, with DC's New 52 initiative (which re-launched the DCU with a new timeline), there's a brand new universe to exploit and make toys out of all ready to go. It's my guess that this is more than likely the direction that the series will head down when the line relaunches in 2013- New 52 based with little to no 'Classic Universe' figs being offered just makes sense at this point.

But what happens to all the great Classic (often niche) characters that never made it into plastic over DCUC's first 20 waves? Club Infinite Earths to the rescue. The subscription based, online only, toy line at mattycollector.com is tailor made for those looking to complete teams and lineups from past eras.

Even the statement released by Mattel (and printed by Toy News International) today seems to lead in the above directions:


"DC Universe is going away after 2012 and there'll be one more wave of 4. In 2013, we'll be relaunching our 6" with complimentary offerings on Matty (mattycollector.com - ed.) and at Mass. You guys will be able to complete your collection and I hope you'll like what we are doing. We've taken lessons from DC Universe and Legacy. Overall, we need to adjust to retailers, consumers and what's selling in volumes that can be supported.

As far as the character that we showed but haven't released, most of them have been tooled so we'll be looking for a way to release them in one form or another. However, I can't 100% guarantee that."

So will we see a line that's the same as what's currently being offered at retail? No. How different will it be, and will we be 'treated' to collector scourges like Nano Missile Superman in every wave? Right now, there aren't any real answers to those questions. Though there'll probably be some scuttle tossed about around NYCC time (October), we'll likely have to wait till Toy Fair '13 to get the whole truth and nothing but.

The other big news of the day as pertains to DC and Mattel is the cancellation of the Young Justice series of cartoon based toys.

I can't say I'm overly sorry to see these go. Being a complimentary line to a TV show, they were done in the style of said program and therefore didn't fit in at all with the rest of the DC Universe Classics figures. Personally, that meant I wasn't interested.

Even characters and playsets (like Superboy's cloning chamber) that I would have liked to add to my collection held very little desire for me. They just didn't look 'right' next to the older line. And sure, some of the designs were the bees knees, but as an 'adult' collector- I have only so much room and devotion to give to any one toy line. DC Universe, fine. Young Justice? Nope. Heck, I didn't even go in for Marvel Universe (the 3.75" line) all that much- Marvel Legends? That's another story.

And in that spirit, I'm very much interested to see what Matty churns out for their new DC Universe line in 2013. Detail and sculpting, thanks to the 4 Horsemen, has almost always been top notch, but I'm hoping for improved posability as well as more accessory items (like that cloning chamber I mentioned). And maybe a new batmobile... Cross your fingers guys and gals...