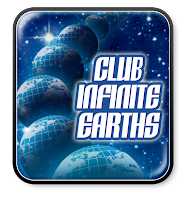 The launch date for the first figure in Mattel's online only, subscription based DC Universe series 'Club Infinite Earths' is finally set in stone... or a reasonable facsimile.

Starting in May (of this year), the line will kick off with the original scarlet speedster- the classic Jay Garrick version of the Flash. In a mass email to subscribers, the toy giant released not only the official word on the Golden Age Flash, but also the full schedule (barring disaster of course) for the remaining Club Infinite Earths figures.


And so, with no further ado: 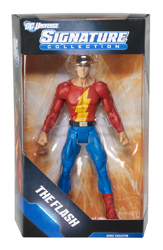 It’s been a long time coming and DC Universe Club Infinite Earths is now on the horizon! Golden Age Flash will be the first figure released and we’ve just confirmed we’ll receive our shipment in mid-May. That means the club will launch in May instead of April. For subscribers, we’ll begin processing orders when the shipment is received (ETA is currently 5/12) and sending them out about 10 business days later. Although the club is starting in May rather than April, you’ll still get the nine figures you signed up for in 2012; we’ll just double up on figures for one month in the fall (you’ll have plenty of notice before it happens).
One thing of note: your club order will not be eligible for combined shipping until June, which is the first “renewal” month. You may recall that the first month a subscription order ships, it has to ship separately, then beginning with the second month it will be combined with your other subscriptions.

Okay, enough business -- on to the good stuff! At press time, here is the release schedule (as always, subject to change):

Even though he won’t arrive until May, our Golden Age The Flash figure will certainly be worth waiting for! The original scarlet speedster, Jay Garrick, will come with his vac-metalized signature helmet and, like all figures in the line, will feature great details and full articulation.
We’ll post updates at MattyCollector.com as we get closer and have more information. For now, you can look forward to an amazing year packed with long-awaited true collector characters!

Thank you for being a loyal customer - we appreciate your business.
– Matty

Matty has made a few detractors over the last few months with questionable quality control and delays on scheduling for their Masters of the Universe Classics series (among others). In my opinion though, the company does a pretty solid job of getting toys that collectors  would never otherwise see at retail into their hands.

Slip-ups or no, Matty should be applauded for actually doing something that few other companies do- giving the fans what they want.