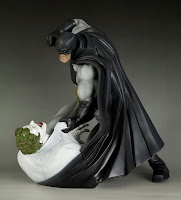 Probably one of the most referenced and talked about mini-series' (or maxi-series, or graphic novel...) in the history of the medium, Miller's work with The Dark Knight Returns was full of character defining moments for the Batman.

If you're a comic fan, then you know the story; but just in case you don't, TDKR features a future Gotham City absolutely overrun by crime. Bruce Wayne emerges from 'retirement' to once again don the mantle of the bat and clean things up... hilarity ensues.

That's the long and the short of the tale, but Miller's Batman is anything but simple. It's full of political commentary, gritty action, and is absolutely drenched in super-anti-hero cool. It basically re-made Batman (along with Year One- if you haven't read that one, please do so as soon as possible) for the late '80s and all the way through to today.

The Koto statue that you're looking at here showcases the final battle between Batman and the Joker, which is one of the pivotal points of the series. It's done in a very similar style to the artwork from the books, accurately reflecting the unique looks that Miller penciled for the combatants. 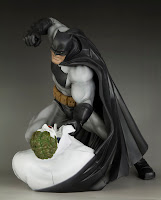 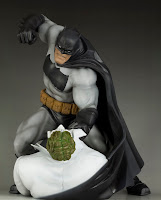 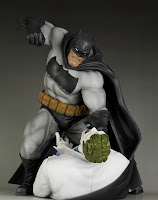 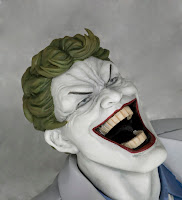 The 12" tall piece was sculpted by Junnosuke Abe and is scheduled to hit stores this September for $129.99
Posted by The Angry Spark at 5:35 PM