Grow Some Dinner with DuneCraft 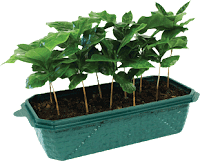 DuneCraft is launching a pair of new edible lines that'll have your in-home garden up and running in no time flat.

There are so many chemicals, pesticides, and generally horrible things for you in the world's food supply that starting a garden and growing your own veggies and herbs almost seems like a bit of a no-brainer. Apparently, I'm not alone-


Growing what you eat is smart and the trend is catching on! That’s right, having your own vegetable garden is now trendy. In fact according to the 2009 Edibles Gardening Trends Research Report conducted by the Garden Writer’s Association (GWA) Foundation, over 41 million U.S. households, or 38 percent planted a vegetable garden in 2009. And, more than 19.5 million households (18 percent) grew an herb garden and 16.5 million households (15 percent) grew fruits during the same period.

The study found that there was a growth in edible gardening from both experienced gardeners and from an influx of new gardeners: 92 percent of respondents had previous experience and 7 percent (7.7 million households) were new edible gardeners.

Another survey done by the American Gardening Association showed a 19 percent increase in new hobby country farms and urban edible gardens in 2009 over 2008.

Not bad- and DC's newest, Sprout 'n' Grow and Organic Veggies, are all set to expand on those numbers. The Organic Veggies series offers favorites like eggplant, watermelon, and peppers - all of which can be used to make a mighty fine Italian dinner.

Of course, what most will probably be more interested in is the SnG line. Why? That one offers growable coffee.