Following in the footsteps of their hit PC games featuring Sam & Max, Telltale Games' will be releasing all of their current episodic adventure games as boxed sets at the retail level. You probably knew that.

Apparently there will also be collector's editions. That you may have figured. Right now that collector's edition (from Lace Mamba Global) is only confirmed for the UK, Australia, New Zealand, Scandinavia, and the Benelux countries. That... is just odd.

But it's more than likely that it's only a matter of time till there's a North American announcement. And with that in mind, here's the packshot for the retail edition of Monkey Island to get you all excited for extra stuff- 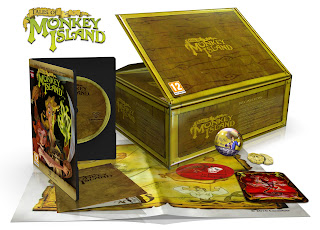 If extra swag isn't all that important to you (you freak), there's also a standard edition that will be available right along side this one when they both magically appear at your local brick and mortar... at some point.
Posted by The Angry Spark at 12:00 PM