Get Buzzed by These Yars' Revenge Screens 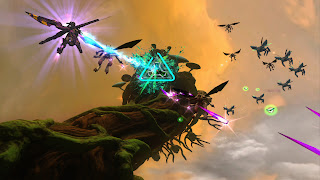 For those not familiar, the Atari classic Yars' Revenge will be coming to the PSN and Xbox LIVE Arcade very soon courtesy of developer Killspace Entertainment.


In Yars’, players will take on the role of a nameless Yar, who has been brainwashed by the evil Qotile empire to do their bidding.  After being shot down and rescued by the ancient and mysterious Bar Yargler, she sets off on a ferociously focused mission, to seek revenge on her former master and his deadly squad of assassins. The bio-technological nightmare of the Qotile home world provides stunning backdrops for players to fly through in aerial combat with their enemy.