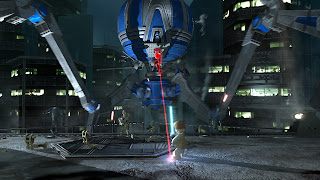 The screens look good- graphics and designs look high quality as usual, but it seems like there isn't really much that can be done at this point to make these games feel... different. LEGO is LEGO and all of the LEGO games in general have very similar looks to them- which is not to say that they aren't fun. In fact, for fans of whatever subject they're based on, they can be a lot of fun- It's just that they're all very familiar.

It looks like for The Clone Wars, the focus is going to be on much larger battles and impressive 'boss' set pieces and characters. The game launches for just about every console (including the 3DS) next month, we'll find out then if the Force is strong with this one.
Posted by The Angry Spark at 1:04 PM