Anarchy Reigns Gets a New Character 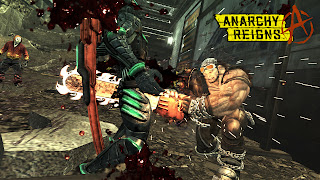 Anarchy Reigns is the new multiplayer beat 'em up from Platinum Games and SEGA. The title, set for release this fall for the Xbox 360 and PS3, features at least one fighter that you probably know- Jack from the Wii exclusive MadWorld.

The other two are the cyber-ninja, Zero, and Sasha. Not sure what her job is exactly but she looks pretty tough with all that... whatever... flying around.