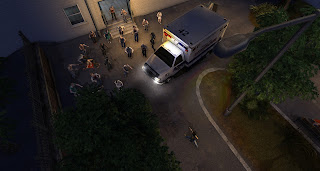 Headup Games' Trapped Dead is a lot of things- it's a zombie game, it's an adventure game, it's an RTS... it features some of the most revolting 'eating' sound effects I've ever heard...

Read on for the full review-

Full disclosure: I've been really excited to get my hands on this game for a while now- yeah, I know, zombies again? But trust me when I say that you'll probably be hard pressed to find somebody who finds zombies less interesting than me at this point- but this one's different in that it actually brings something a little different to the table.

Most often described as a real time strategy game, TD is a lot more like the PC classic Diablo than I thought. This is especially true in the first couple of levels, before you amass any real 'party' to speak of. It's basically: click a spot, move there - click an enemy, attack it. Rinse, repeat. It can get monotonous simply because that's pretty much all there is to the game- control wise.

You do use items and you can actively switch between run (which actually attracts zombies) and walk, but there isn't all that much else to it. The control system isn't what you'd call 'deep' and that may hurt it's chances with some, but I found that there isn't really anything else that it has to do. Trapped Dead isn't about redefining play mechanics- it's about recreating the atmosphere of those gory, semi-goofy, horror movies of old. And that it does.

The story starts out with two college kids driving back to school and cutting through a rural area. Their car breaks down near a gas station and one of the guys, Mike, goes out to investigate. At this point, you should more than likely have guessed that staying in the car isn't a great idea for Mike's pal Gerald.

I don't think saying that is too spoilerific is it?

Anyway- the story brings the two into the local town that is (again, not much of a spoiler) infested with zombies. Mike is the main character, but you'll meet a few allies along the way spanning most all of the horror movie/videogame staples... with one exception- Professor Harper. He's a doctor at the county hospital and he's in a wheelchair. Now that's different, and he plays differently as well.

As you'd expect, the Prof can't use stairs and moves slower than the rest of the survivors in your group. It's a really cool and unique idea, especially for a survival horror game. The other kind of neat idea in here are the environmental traps that you can trigger.

You'll come across zombies that are just begging to be smooshed, smashed, and otherwise clobbered by parts of the levels themselves. It's cool stuff and they're a nice change of pace from the usual bludgeoning and shooting that, again, is pretty much all you otherwise have to do.

The zombies themselves are pretty standard- with a few exceptions -but everything fits well into the theme of the game. Again, this isn't Resident Evil, think 'old horror movie'. You're not going to come across the wild BOW's that Chris and Jill threw everything but the kitchen sink at. And although every area is different they all have pretty much identical goals- get to the end alive.

Graphically, TD won't blow you away- this isn't Crysis either. It plays out in a three-quarter, isomorphic view that you'll have to pivot the camera around at times to get the best view. That being said, it's not exactly ugly. The different areas are all well detailed and have lots of little touches that add to the overall realism of the locations. And that's one of the enduring hallmarks of classic zombie tales, every day buildings and places that become homes for monsters. Oh, and I should mention that the cut scenes are done in still panels like a comic book- maybe a nod to The Walking Dead? Either way, it looks cool.

Controlling the character's took a little getting used to. It's a sometimes clunky, sometimes hit and miss affair that really should have been smoothed out prior to launch- or at the very least, should be fixed with a patch ASAP. Occasionally, I would click on the ground to run or click to baseball bat a baddie over the head and nothing would happen. No biggie when I've got the drop on said baddie, biggie when I'm surrounded by evil (trapped in time and low on gas) and Mike somehow forgot how to swing for the fences. But I don't want to make it sound like it's all bad because there's actually some nice strategic play to be had here, particularly later on in the game, it's just... quirky.

Overall though, I'm probably being a little nit-picky because I liked Trapped Dead. It might be a case of the sum equating to more than it's parts but it definitely has the feel that Headup was gunning for. If you like zombies, action/adventure games like Diablo, or RTS-lite gaming- and you can make it through the little, frustrating bits -you'll probably find something to like here.