It's pretty rare, but once in a great while a portable game comes along that looks just as good as it's home console cousins, plays just as fantastic, includes more content, and is just so much fun in general that you actually forget about said console cousins. 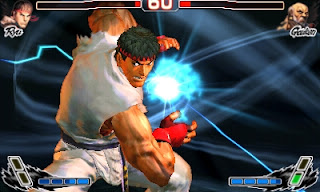 Portable fighting games are pretty much a 'yeah no' kind of thing. There have certainly been some good ones over the years, but they're so far outweighed by all the half-assed or just plain awful attempts that the genre as a whole barely warrants a mention. And while Sony's PSP may have a decent stable- Nintendo's lineup of portables, usually rich in great experiences of every kind, have a pitiful few (actually I can only think of Street Fighter II & Street Fighter Alpha 3 at the moment). There actually haven't been all that many triple 'A' fighting games as of late at all, and fighters in general seem like they've been on hiatus since the late '90s/early 2000's. What was the last fighting game that you played, prior to Street Fighter 4's release that was 'excellent'? Mortal Kombat Armageddon? Marvel vs Capcom 2? The point is that you have to go a ways in the wayback machine to find a really great title. Something spectacular.

Now a new age of classics has been ushered in- Marvel vs Capcom 3, Tatsunoko vs Capcom, Tekken 6, the upcoming Mortal Kombat reboot, etc... and what game kicked all of this off? SF4. And now the 'Super' version of SF4 has come along for the ride as a 3DS' launch game. And it is good.

As far as the graphics go, Super Street Fighter 4 3D is a beautiful showpiece for the 3DS. The characters are just as big, colorful, and detailed as their Xbox and PS3 counterparts. The arenas are equally impressive with all parts intact (Dhalsim's elephants would be proud) and the animation is nothing short of superb. Even the lighting effects and special moves, while not quite as impressive as on the consoles, look great. This is a fantastic looking game, period. Now crank up the 3D- the backdrops fall into multiple levels of depth and the combatants really pop. It looks (and plays) great. And that's without trying the new dynamic camera angles in the 3D View Mode. 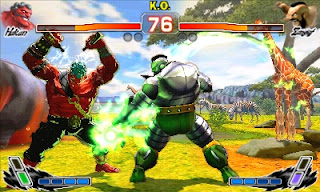 This is meant to really show off the 3D aspects of the game, which it does. But that's pretty much all it does as the game essentially becomes a third-person-puncher. It can get kind of confusing as well, as occasionally I found myself rolling the pad in the wrong direction to pull off a Hadoken. It's an interesting distraction from the meat and potatoes main game but it's probably not going to hold much of your attention past a few rounds here and there.

Overall though, the controls are tight and easy to manage. It can be difficult to properly control a portable fighting game that fully utilizes all six control buttons, but most of what you'll find here control wise is thankfully very good. I say 'most' because there are some negatives. First is the 'L' button- the default 'hard punch'. As anyone who regularly uses Ken or Ryu can tell you, the old HP gets a real workout. The 3DS, much like the DSi, is pretty boxy though, and hitting 'L' every few seconds while still managing to use your thumb to control your fighter can take some getting used to. In my case it took a lot of getting used to- okay maybe I never got used to it. Happy now? 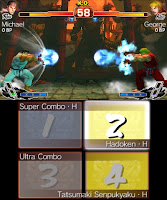 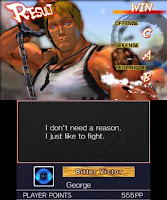 The other negative about the control, and to some this actually might be a positive, are the mappable buttons on the touch screen. You can map up to four attacks (including specials and finishers) to these buttons for easier use if you have a problem pulling off specific moves in the game. This is a boon to anyone who can't pull off Zangeif's spinning piledriver... or maybe just for someone who has issues with the 'L' button... Skilled players, though, might take offense here since it's pretty much is sanctioned cheating, isn't it? Although I suppose you could make the argument that it's just a way to level the p[laying field so that everyone has a chance at a 'W'.*it should also be noted that you can take this out of the picture in multiplayer mode- though I never encountered anyone who did.

And speaking of PvP, although there is local 2 player, there's also a surprisingly good online mode to be had here. Very little lag with a painfully easy to use matchmaking system mean that you can be beating each other up over the net in no time flat. And let's be honest, 'Here comes a new challenger!' never gets old does it? 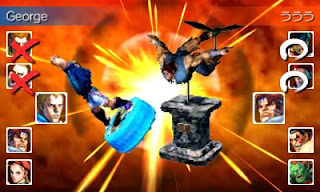 Other modes include the Street Pass mode - Figure Battle. As you play the main game, you collect tokens that you can spend at a virtual shop in the game. Here you can 'buy' figures- little statues that represent different characters in the game. They all have differing levels of strength and there are a ton of them. After you assemble your team of staction figures, you simply walk around with the console in sleep mode and if you should pass by someone with the same thing going on- your imaginary toys butt heads. It doesn't do much but it's a fun idea and is just one more goody that Capcom has tossed into this nice little package. 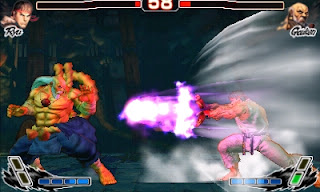 Overall, it's really hard to not recommend this game. Super Street Fighter IV 3D edition would be a standout at any time in the 3DS' life span, but as a launch game- it's one overjoyed Shoryuken to the face. You really can't go wrong with this one.