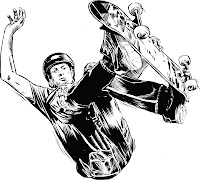 The satellite radio giant has a series of Town Hall talks going, if you didn't know. Each one happens in front of a live studio audience and focuses on an "iconic artist", with September 10th's talk featuring none other than the legendary bird man.

Hawk, who hosts Tony Hawk's Demolition Radio on the broadcast service (on the Faction channel), will chat with fans about his life as a pro-boarder and his work with underprivileged communities. The panel presentation will be hosted by someone else you may know- Stacy Peralta.

Peralta, also a skater, directed the upcoming (due 11/2) biopic Bones Brigade: An Autobiography.

“I’m looking forward to talking with the live audience and answering questions with Stacy,” said Tony Hawk. “I’m proud to be a part of his new documentary and I hope to enlighten fans about our history together and the evolution of action sports in general.”

SiriusXM is also pretty happy to be in the Tony Hawk business, according to company CCO Scott Greenstein:

“Tony’s talent and passion have taken a niche sport and helped turn it into a phenomenon with international popularity and appeal. He has crossed the lines of action sports, gaming and music to become one of the coolest brand ambassadors of our time, not to mention one of the driving forces powering our Faction channel,” said Scott Greenstein, President and Chief Content Officer, SiriusXM. “Tony lives his life in non-stop action and listeners will get a broad look into what it’s like to be a legendary pro-skater and get an expansive look into the icon’s life without boundaries."

The program should be a pretty good time, and a definite solid listen for fans of Hawk- or just skateboarding in general. And this is no flash in the pan, past SiriusXM Town Hall's have featured such entertainment bigs as Bruce Springsteen, Tom Petty, Ringo Starr, Gregg Allman, Usher, Linkin Park, and Nirvana- so it's got a quality pedigree.

Artwork pictured is from Tony Hawk's Pro Skater HD, now available for the Xbox 360 and Playstation 3.
Posted by The Angry Spark at 9:25 PM