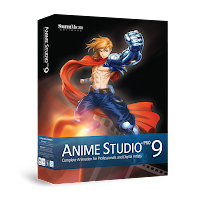 The next edition of Smith Micro's excellent Anime Studio is available now and promises some awesome new features for animators of both the newbie and pro variety.

Anime Studio actually has some great credits to it's name including Nestle, Chevrolet, and Axe- so it has quite the pedigree for producing high-quality work. The ninth iteration of the software also promises seamless compatibility with Wacom's series of tablets and use of the full range of multitouch capabilities you'd expect from them.

Here's some of the new stuff you can expect:


•64 Bit Architecture and GPU Acceleration – Takes advantage of the latest computer's memory and speed.•Smart Bones – A revolutionary enhancement that reduces or entirely removes distortion around a character's joints.  The Smart Bones control levers create 3D looking motion that can be easily repeated with the click of a mouse. Smart Bones not only steps up the quality and realism of the bone actions, but makes it much easier to repeat complex movements and control rigged elements.•Editable Motion Graphs – In Motion Graphs, the animation channels of the current layer are displayed graphically, rather than just as points along a line. With Editable MotionGraphs, now users can get maximum, detailed, control of their animation, instead of relying on pre-set interpolations

Smart Bones, in particular, is a very cool thing. This new tech all but eliminates traditional frame-by-frame animation- personally, I don't have much experience with animation but I know a few who do and I can tell you that's a very good thing.