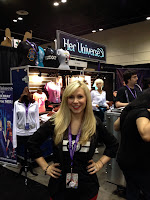 Ashley Eckstein's fangirl clothier was in full effect at the Star Wars Celebration in Orlando, Florida last month. Now the company has released a video diary to give you a guided tour of the show.


The bits and pieces of the diary were originally posted to StarWars.com as they were filmed, but after the con Ashley edited the whole thing together into one gigantic video look at all things Star Wars. And even if you were watching as they all went live, you still haven't seen everything as the new vi-doc has an added 20 minutes of footage not previously aired.

Ashley decided to tape herself giving the tour of the event instead of simply blogging it, but it had nothing to do with just being comfortable on camera. The Star Wars: The Clone Wars star says it was mainly the heavy influence that social media has that made her choice of coverage an easy one.


"I've never been good at keeping a written diary and I wanted to capture the events and memories of Celebration VI for myself and the fans in a different way," said Eckstein. "With social media being the way it is today, a video diary seemed like the best way to cover CVI."

And as for the final film itself, it's actually got a pretty fantastic pedigree.


The video diary, directed by Jason Surrell, a screenwriter and Senior Show Writer for Walt Disney Imagineering and edited by Studio Say So, an Orlando-based video production company, is a collaborative effort with Eckstein. "I was absolutely thrilled when Ashley asked me to direct her video diary at Star Wars Celebration VI," said Surrell.  "After directing Ashley and her fellow Clone Wars cast members in Behind the Force at Disney's Star Wars Weekends for so many years, I knew that there's a whole other world out there that people typically don't get to see.  So I'm hoping that our series of video diaries will truly give Star Wars fans a peek behind the curtain at all the fascinating and truly funny things that happen when these people get together. I've never been happier to be a fly on the wall.  We're going to take you onstage, backstage and everywhere in between."

You can check out the full movie here.