IDW, best known for their awesome revivals of '80s properties like Transformers and GI Joe, will be launching a brand new ongoing series next year based on the True Blood modern fantasy universe.


Since the first issue launched in July of 2010, the TRUE BLOOD comic books have become one of IDW Publishing’s most popular titles.  Fans of the hit HBO show were excited to have new, unique stories featuring their favorite characters.  In an effort to give Truebies what they crave – more Sookie, Bill and Eric – continuously through the year, IDW and HBO will launch the first-ever ongoing TRUE BLOOD comic series in spring 2012, featuring new series installments each month.

So what does series creator Alan Ball think?


“The comics are a great way to continue telling True Blood stories off screen,” said show creator, Alan Ball. “With this new ongoing series, Truebies will be able to find a new comic in stores every month. We’ll also have even more room to create in-depth drama and further explore the world of Bon Temps.”

Sounds good. But the new series is far from all there for Trubies (apparently, that's what TB fans are called) to sink their fangs into.


Following on the success of the New York Times best-selling first comic collection, TRUE BLOOD: ALL TOGETHER NOW, IDW and HBO launched the second edition TRUE BLOOD: TAINTED LOVE. In this twisted tale, co-written by True Blood actor Michael McMillian and comic mainstay Marc Andreyko, Jessica is exposed to contaminated bottles of Tru Blood, causing the lovely vampire to go berserk. It’s up to Sookie, Bill, Eric and the rest of the Bon Temps gang to figure out who (or what) is behind the bad Blood. Plus, Reverend Newlin is back and as always in the world of True Blood, things are not as they seem. Both TRUE BLOOD: ALL TOGETHER NOW and TRUE BLOOD: TAINTED LOVE are currently available in comic and book stores, and through the Apple iTunes and iBooks stores.

If you're a fan of bloodsucking drama, there's a lot to like. Want True Blood on paper without a trip to the book store- here's some links to chew on: 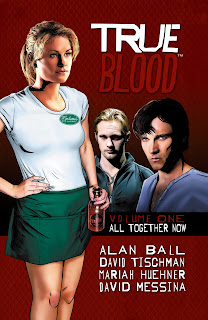 The entire TRUE BLOOD COMICS COLLECTION is available for the iPad, iPhone and iPod touch through the Apple App Store [http://itunes.com/apps/idwpublishing/truebloodcomicscollection]