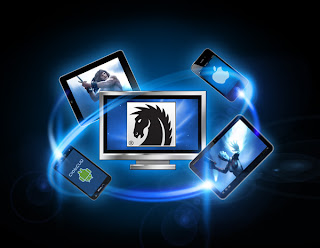 Dark Horse Comics has a few digital releases all lined up for the New York Comic Con next week including a Mass Effect book that was previously available through third party outlets.

Also at the Dark Horse booth, those looking for a game of chance can try their luck at the Digital Prize Wheel. With a spin (and some luck) show goers can win digital offerings from the publisher as well as take home T-Shirts with more chances to win attached.

Last year’s New York Comic Con saw the announcement of Dark Horse’s digital store. This year, we’re celebrating that anniversary in style with special-edition comics, in-booth events, and giveaways, as well as prizes for attendees of New York’s premier convention.
First of all, leading into the convention, Dark Horse will release a special three-part digital preview comic, showcasing eight pages of each of our new fall titles! Check out Tom Morello’s Orchid, P. C. Cast and Kristin Cast’s House of Night, and of course, Guillermo del Toro and Chuck Hogan’s The Strain! This special preview comic will be available at Digital.DarkHorse.com on October 12.
That same day, Dark Horse will also release a special sixteen-page Mass Effect digital comic, featuring the previously released “Incursion” story from MySpace Dark Horse Presents as well as the “Inquisition” story originally featured on USAToday.com for 99 cents. Visit Digital.DarkHorse.com TODAY for an exclusive eight-page preview of the highly anticipated Mass Effect: Invasion series!
Spin the Dark Horse Digital prize wheel and win free digital comics! That’s right, show attendees can step up, spin our wheel, and win a fortune in credit in the Dark Horse Digital Store. One chance per customer per day, with the opportunity to win more than once throughout the show!
If that’s not enough, we will be giving away t-shirts all weekend long “tagged” with additional chances to win Dark Horse digital store credit!
Stay tuned for more news on Dark Horse’s New York Comic Con announcements and events daily!
Posted by The Angry Spark at 12:07 PM