The classic Xbox game Oddworld Stranger's Wrath, first released back in 2005, will be re-released as a Playstation Network exclusive at some point down the line- Edit: Tentative download date is Q1 of 2011

This is great news for fans of the series that haven't seen a new entry since O:SW first came out- Playstation gamers in particular haven't seen an Oddworld game since Abe's Exodus (1998)! As I remember (I've never played the game), Stranger's Wrath didn't really bowl anybody over but became a bit of a cult classic. Although with a meta score of 88, it must not have been that bad.

Even less 'that bad'  will be all new bonus material for the fans, remastered graphics, Move support (!), and more. Not announced were the inclusion of Trophies, but I can't imagine it won't have any. That would just be odd. *ahem* 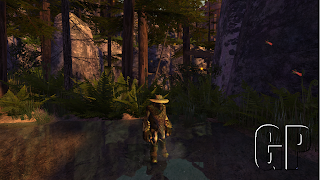 Pressy after the jump-

Just Add Water (JAW) is thrilled to announce the return of the critically-acclaimed Oddworld series - with an enhanced remake of the award-winning Oddworld: Stranger’s Wrath coming to PlayStation®3 next Easter.

Originally released in 2005, first- and third-person action-adventure Stranger’s Wrath marks the multi-million-selling series’ first appearance on a PlayStation® console since 1998’s Oddworld: Abe’s Exoddus. The game will be made available as a digital download via PlayStation® Network.

Stewart Gilray, Managing Director of JAW, said: “Since word got out that we’ve been working with Oddworld Inhabitants there have been many rumours circulating about what we’re working on. Oddworld: Stranger’s Wrath is the first project in what we believe will be a long and fruitful relationship. Having the chance to update this great title and release it on PS3 is just a brilliant opportunity, not least for us, but for the fans too.”

JAW has worked closely with Oddworld founders Lorne Lanning and Sherry McKenna to ensure the remake is faithful to the original moolah-chasing epic, while offering a raft of enhancements, including: stunning 720p visuals; much more detail in the characters; normal mapping and self-shadowing; re-mastered dialogue, support for PlayStation®Move; and additional bonus material still to be revealed.

In Oddworld: Stranger's Wrath, players step into the role of the Stranger, a rough and tumble bounty hunter who tracks down outlaws for moolah. Using a special weapons system that gives a whole new meaning to "live" ammo, players encounter deviant species and hostile challenges along the way.

The 2005 original has a Metacritic rating of 88, was nominated for Outstanding Achievement in Animation at the Academy of Interactive Arts & Sciences' Interactive Achievement Awards, and received numerous awards from the gaming press.
Posted by The Angry Spark at 11:05 AM