New 'Lord of the Rings: the War in the North' screens 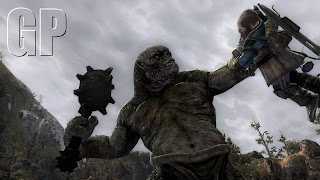 One of the newest games to hold the license for the beloved LotR franchise, the War in the North seems to be doing a lot of things right.

From the RPG-ish feel to the bloody realtime combat, it's really shaping up to be a Lord of the rings game that fans can really get behind. That's something we haven't seen since the Two Towers and Return of the King games on last gen consoles- which, while great action romps, weren't exactly deep.

Read on for screens a some WitN fun facts-


* Create your own Fellowship ‐ Together, players and their friends will experience an epic, story‐based adventure through vast Middle‐earth to experience storylines and characters going beyond what has been seen in the feature films and previous games.

* Play as a team or perish! ‐ Social play is redefined through groundbreaking online, interdependent co‐op gameplay which enables three different gamers to play as a complementary group where individual skills enhance the success of each team member.

* Challenge Missions ‐ Special missions consist of defensive positioning and group raids for up to 3 players, built especially for co‐op challenges and not tied to the story.
Posted by The Angry Spark at 1:08 PM