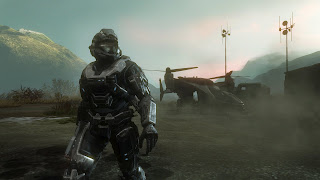 It's not really much in the way of gameplay (even though it's all 'in engine'), but for what it is, it looks very, very good- check it out after the jump.

Step into the boots of a Spartan III and prepare for the first look at “Halo: Reach,” the highly anticipated prequel to the “Halo” trilogy from acclaimed developer Bungie coming fall 2010. The very first “Halo: Reach” video had its worldwide debut last night during the Spike TV Video Game Awards by actress Tricia Helfer, offering gamers a taste of the story to come.


Taken from part of the game’s opening cinematic, the video provides the first look at the story of “Halo: Reach,” which introduces players to Noble Team, a squad of battle-hardened Spartan soldiers. “Halo: Reach” charts the story of Noble Team in their heroic stand to defend the planet Reach, its people and secrets against a ruthless assault by an alien collective known as the Covenant.


Suitably epic... I cannot wait for this game.