And now a word about a game you're probably going to get anyway: 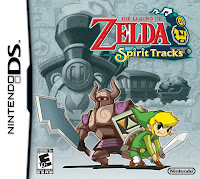 One of the year’s biggest adventures is fired up and heading down the tracks. Today’s launch of The Legend of Zelda™: Spirit Tracks for the hand-held Nintendo DS™ and Nintendo DSi™ video game systems marks a fun new chapter in the historic franchise. For the first time, heroic Link™ teams with Princess Zelda™, who accompanies him on an original quest to save Hyrule from ruin. This unforgettable saga has Link navigating perilous dungeons and commanding a customizable train. The Legend of Zelda: Spirit Tracks features challenging puzzles, wide-ranging exploration and a deep storyline.
The Legend of Zelda: Spirit Tracks builds upon the dynamic touch-screen control interface established in 2007’s The Legend of Zelda: Phantom Hourglass, making it easier for players to perform advanced maneuvers and guide Link through an engaging series of adventures and challenges. An active participant throughout the entire game, Princess Zelda can take control of powerful Phantom characters to help Link make his way through obstacle-filled dungeons. New items include the Whirlwind and the Spirit Flute, which allows players to perform music that has magical effects on objects and events in the game by blowing into the built-in microphone of the Nintendo DS or Nintendo DSi.
While controlling Link’s customizable train, players can take on special missions in which he transports people and valuable cargo across the game world. The train offers players the opportunity to explore the world of Hyrule, taking more challenging routes to reach new areas as they acquire new parts and equipment.
The Legend of Zelda: Spirit Tracks includes a new head-to-head multiplayer mode that lets up to four players compete via a local wireless connection with one game card. In this mode, players explore six unique areas in search of valuable Force Gems. Traversing these areas and attempting to possess the most Force Gems at the end of each session, players must also avoid patrolling Phantoms, while setting off traps and using hidden abilities to foil their opponents.
“During the holidays, people are striving to find entertainment options that offer hours of fun, and The Legend of Zelda: Spirit Tracks delivers,” said Cammie Dunaway, Nintendo of America’s executive vice president of Sales & Marketing. “For more than 20 years, audiences have been captivated by the storyline and sense of exploration offered by these beloved games. The plot twists and seamless controls of this latest installment will engage existing fans of The Legend of Zelda series while introducing new players to the series’ magic.”
The Legend of Zelda: Spirit Tracks is the 15th game in this internationally renowned series. Since its inception in 1986, more than 59 million games in The Legend of Zelda series have been sold worldwide.
For more information about The Legend of Zelda: Spirit Tracks, visit www.zelda.com/spirittracks.

I love Zelda games, such a sucker...