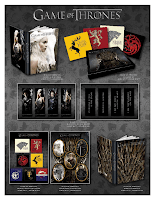 Dark Horse that is. The publisher announced today that they've secured the rights to the HBO series based on George R.R. Martin's immensely popular books. What merch will we be seeing from this collaboration?

As you can see in the promo- pretty much everything.

Dark Horse Deluxe is proud to announce, in partnership with HBO, a vast Game of Thrones product line debuting in the spring of 2012, leading up to the show’s second-season premiere in April. Licensed product categories derived from the series will span a large range, including statues, busts, and action figures; prop and jewelry replicas; and barware, stationery, and other collectibles. This exciting new line of products debuts with a range of branded magnets, patches, playing cards, coaster sets, and more.
“We are delighted to be part of HBO’s licensing roster for Game of Thrones. We are big fans of the television adaptation,” said Dark Horse’s VP of Product Development, David Scroggy. “We are working closely with HBO to develop a line of products inspired by the series that will delight the fan base.”

The first offerings from the new lineup will begin to be available for pre-order at comic shops this January for a March 2012 debut on store shelves. Bring. It. On. 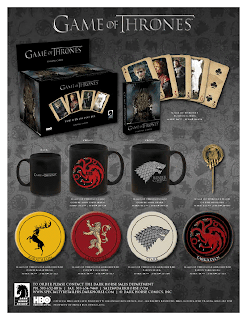