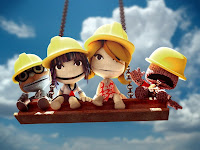 Some great info here for LBP fans who are, no doubt, eagerly awaiting the second game in the Playstation exclusive series. Some stand-out info:


Read on for the whole list of known stuff. Good all around.


Greetings fellow Sackboys! With the announcement of LittleBigPlanet 2 last week, we know you have a ton of questions for us. Add to that, all the new PLAY elements, CREATE tools and SHARE evolutions we want to tell you about. So, we thought we’d answer a lot of the repeating questions we’ve seen on all the web comments out there. In weeks to come, expect more and more detailed tid-bits, new LBP2 news, special announcements and other good stuff from our team… Are the LittleBigPlanet DLC costumes going to be compatible with LBP2?
Yes, any LBP1 costumes purchased on the PlayStation Store will be compatible with LittleBigPlanet 2 – We can’t wait to see you what you guys do with the various costumes combined with the new cinematic tools!
I hope this is on a FAQ – are the first LBP and GOTY edition levels going to be included with LBP2?
The wonderfully fun LBP1 story levels will remain unique to its Blu-ray disc, but you’ll see familiar elements/tools/items as part of the foundation for LittleBigPlanet 2. And while the community levels will be unique to the GOTY edition – hopefully if you guys vote for us again, you’ll see something similar in the future…
Will any of the new costume DLC that will be released after LBP2 is released be compatable with the first game?
LittleBigPlanet 2 has been redesigned with a completely new graphics engine, so costumes and upcoming DLC designed for LittleBigPlanet 2 will not be compatible for LBP1 players.
Will all the costumes/stickers/decoration/DLC we collected in LBP1 be usable in LBP2?
We’re working hard to ensure that everything you’ve collected from LittleBigPlanet can be used in the new game. Certainly anything you’ve picked up from the PSN Store will be fully present and correct in LittleBigPlanet 2, the only time something might not quite work perfectly is if it has been created by another player using a ‘glitched’ object of some kind. Even then we’re optimistic that all of the existing content you’ve collected will continue to work.

Any idea when we’ll be getting that Sephiroth skin? Nothing confirmed yet, but don’t worry we still have this in our plans… Whatever happened to the Marvel Comics themed costume pack that was supposed to come out a year or so ago? I REALLY wanted a Wolverine Sackboy and it’s quite disheartening that something so cool was announced and shown and then never mentioned again. We announced the partnership at Comic-Con last year (but no release date). It takes a bit of production time to get everything lined up, but hopefully you’ll hear some announcements soon. Will LBP2 include from launch day all the DLC of LBP1? Including costumes level packs and all that good stuff? Because of the backwards compatibility for LBP1 DLC, all the costumes on the PlayStation Store will still be available for purchase. Expect to see a ton more content in the next few months, including the eventual LittleBigPlanet 2 DLC.

Will it be in 720p or 1080p?
LittleBigPlanet 2 is getting a completely new graphical overhaul, so stay tuned for a future LittleBigPlanet 2 post, where we’ll cover off on more specifics like this.

Sackboy, no matter what costumes he wears still looks like Sackboy in LBP1, seeing the new costumes in LBP2 has this idea been lost? Some of the new costumes we’ve shown for LittleBigPlanet 2 are certainly unconventional, but then Sackboy has an eclectic wardrobe taste. At the end of the day however, he’s still Sackboy and we’ll be sticking close to making him look that way no matter what the costume. Will Stephen Fry be narrating it again? Yes, your (and our) favorite narrator will be back for LittleBigPlanet 2. Will this game have the 50 levels single player like the first game or is this just a big create kit? LittleBigPlanet 2 is a whole new game, so just like the original you get a full storyline for Sackboy to play thru. Add to that the endless possibilities of the evolved Create and Share modes, where you’ll see completely different gameplay experiences in the community levels.

Can I electrify/set things on fire using switches and logic? What has happened to emitters in LBP2? Are they much easier to use? Has dissolve material changed? How many layers will there be and what different types?
Expect some lots more details about CREATE mode at this year’s E3.
I heard of custom Voice Acting. Confirm or Deny.
Confirm!

Does Sackbot have to look like a robot or can I change his form to any creature? Nope, Sackbots are totally customizable, from their reactions to their clothing/skins. Just to double check, we’ll be able to have evil Sackboys as bad guys? There’s no such thing as an evil Sackboy – just some mischievious ones…Sackbots, on the other hand, can have a mind of their own. Can you program Sackbots to activate swithces? *Example* giving them jobs on a pirate ship. Stay tuned, we have a specific “Sackbots” feature planned in an upcoming LittleBigPlanet 2 post – we just hope you provide your Pirate Sackbots the proper minimum wages :)

I just saw the LBP2 box art pop up on Twitter…Why didn’t you guys post it here?
Glad you noticed, but don’t get too attached to that piece of art – It’s something we put together from the artwork created for an exclusive EDGE Magazine cover article. And while we love it, its definitely NOT final box art.
Are you guys going to be at E3? I hope so, every gamer in the world needs to see LBP2!
Of course we’ll be at E3, the bigger question is…will you?
Will there be a Sackboy costume contest again?
I sure hope so, we had so many great entries last time. And now that we have more fans and more people familiar with what can be done, we can’t imagine how creative you guys can get. Stay tuned.
Will there be any pre-order goodies?
Yup. Expect announcements later down the line. We have to make sure all the “i”s are dotted and “t”s are crossed.
What is the name of the song on the video. I can’t get it out of my mind!
The song “Sleepyhead” is from the group Passion Pit. And we’re glad you all like it!

Hopefully this will answer a lot of questions out there, if not, feel free to ask and we’ll start up another FAQ session…
Posted by The Angry Spark at 5:36 PM