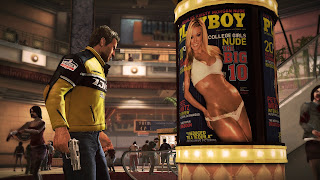 Capcom has teamed with Playboy magazine to bring "The Bunnies into the game". Really.

What seems like an odd move at first might make a lil' more sense once you really think about it- at least from Playboy's perspective. The men's magazine has been loosing readership (*ahem) for a while now and adding itself into the world of gaming is as good an idea as any to try to snag a younger market of guys.

True that their game from a few years back bombed- but this is a little different. Dead Rising is a proven name and the sequel is set up to sell a ton of copies. It's just the thing to get the Playboy name back into the mass unconscious.

Official word after the break.

Capcom, a leading worldwide developer and publisher of video games, today confirmed that it has partnered with Playboy magazine to have content from the iconic publication featured in its forthcoming title Dead Rising® 2, scheduled for release later this year for the Xbox 360®, PlayStation®3 and PC platforms.

Players that discover the Playboy magazine in the game will receive a unique and special upgrade for Chuck Greene, the main character in Dead Rising 2. Furthermore, players will come across Playboy ads and billboards that will feature specially selected issues from the magazine’s 57-year history.
The new magazine system for Dead Rising 2, which will feature Playboy along with various other publications, is an evolution of the popular book system from the original Dead Rising game. Along with the special Playboy issue, there will be a variety of different themed magazines that Chuck will be able to pick up for bonuses to use to help fend off the zombie hordes along the way.
“The Sin City-type environment in Dead Rising 2, Fortune City, is a natural playground for the Playboy Bunnies,” said Seon King, Senior Director of Licensing for Capcom Entertainment, Inc.  “We have integrated the Playboy brand throughout the game in ways that bring even more life to Fortune City and add to the user experience.”
About Dead Rising 2:
In Dead Rising 2 former motocross champion Chuck Greene arrives at Fortune City, America’s latest adult playground, to participate in the zombie game show Terror is Reality, a gruesome test of strength and agility through excessive and imaginative dispatchment of hundreds and hundreds of zombies. While in Fortune City, a zombie outbreak occurs and Chuck must survive the onslaught of the undead for 72 hours. Pitted against bosses and psychos – tens of thousands of zombies and the constant countdown of the clock - while potentially rescuing other survivors of the zombie apocalypse, players must also unravel the greater conspiracy behind the outbreak.
The Dead Rising® series is renowned for letting players pick up and use everyday items to fend off hordes of the undead, but Dead Rising 2 adds a new twist with combination weapons. Take two objects, add a roll of tape plus the inventiveness and skilled hands of Chuck Greene and an innocent water gun and a can of gasoline become a deadly flamethrower, while a garden rake and car battery combine to create an electrified zombie prod. Using combination weapons to fend off hordes of the undead in fun and grotesque ways is only just the beginning as the more combo weapons a player uses, the more Prestige Points (PPs) they will rack up. Earn enough PPs and Chuck levels up which will helps him along the way.
Equally important is Chuck’s need to to find Zombrex, a drug that stops his infected daughter Katey from turning into a zombie. Players will decimate thousands and thousands of zombies in an increasingly outrageous manner in order to beat the clock and survive 72 hours in the darkly comedic, no-holds-barred confines of Fortune City.
Dead Rising 2, along with its own brand of dark humor, will be available later this year on the Xbox 360, PlayStation3 and PC platforms.
Posted by The Angry Spark at 1:21 PM