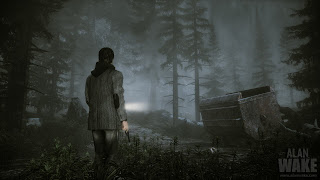 And you'll get your dose of Alan in Japan on the 27th.

Alan Wake has been a looooong time coming but- as opposed to most games that take this long in developement purgatory- not only is it coming out soon, but it looks damn good to boot. Kudos to developer Remedy for (hopefully, it's not out yet) coming through on this one!

Now, what's the state of Payne?


“Alan Wake” fans, now is the time to wake up!  A new video from the upcoming psychological action thriller exclusive to Xbox 360 is available today, offering a creative insider’s look into “Alan Wake.”  With the relaunch of AlanWake.com, look no further to get the most up-to-date information about the highly anticipated title set to launch in select countries in Europe on May 14, in North America on May 18 and in Japan on May 27.

Today, Microsoft released a new narrated trailer titled “Alan Wake: Building the Thriller,” encapsulating everything known about the psychological action thriller so far, while introducing the highly anticipated title to the uninitiated.  Featuring never-before-seen footage containing previews of the unfolding mystery, even stalwart “Alan Wake” fans who have been following the title since it was first announced will want to examine the trailer for clues and details about the heart pounding thrill ride of “Alan Wake.”

To help bring the game to life, Microsoft has collaborated with well known merchandisers to offer a wide range of items for fans to show their adoration for “Alan Wake.” One such program is with CafePress, with others to be announced soon.

In a special collaboration with CafePress, the world's biggest destination for self-expression through merchandise, fans are now able to design and sell “Alan Wake” inspired products.  Unique fan-created items will be available for purchase starting today with the full online store grand opening planned for April 16, 2010. From T-shirts and hoodies to water bottles, customize and outfit yourself with gear from “Alan Wake” at http://shop.cafepress.com/alan-wake to bring the game to life.

If you can’t wait to step into the world of “Alan Wake,” secure your Bright Falls Bonus Pack for exclusive “Alan Wake” content by pre-ordering your copy of the game now from participating retailers.  A must-have for anyone intrigued by the game, the Pack includes Avatar gear like the “I Am Awake” T-shirt and an Xbox LIVE “Bright Falls” theme based on the game.

For those seeking to add the ultimate “Alan Wake” collection to their bookshelves, the Limited Collector’s Edition, designed to resemble a hardcover novel, comes packed with special bonus content including “The Alan Wake” Files collectible book – a 144-page book containing a short story penned by Alan Wake and a compilation of FBI dossiers investigating the mysterious events at Bright Falls; an exclusive Xbox LIVE theme and Avatar; video documentaries exploring the development of “Alan Wake”; in-game commentary and hints from Remedy; and much more.

Bringing a new style of storytelling in this dynamic new title exclusively for Xbox 360, “Alan Wake” is developed by Remedy Entertainment, the renowned original developers of the successful “Max Payne” series.  “Alan Wake” immerses players in an intense and expansive cinematic world that enables players to explore the hyper-realistic and interactive environments.  “Alan Wake” is episodic-based with a deeply engaging and suspenseful storyline unveiling new twists and profound character revelations at every turn, rated T for Teen.  For more information, please visit AlanWake.com.
Posted by The Angry Spark at 1:30 PM