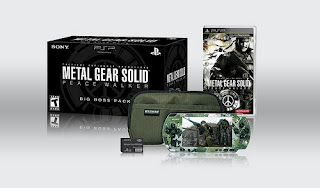 Along side the UMD (I haven't heard about the digital version), there will also be a pair of special bundle packages offered. The first is the usual bundle that we're all used to- it includes a 2gig memory stick and a special 'camo' PSP. The second is a little better- the 'Big Boss' package includes the game, a 2gig stick, a camo PSP, a military green carry case, and special Metal Gear packaging. We have something very special for all of you ULTIMATE fans out there! Launching with the game on June 8, you can pick an exclusive limited edition “Big Boss” Pack for METAL GEAR SOLID: PEACE WALKER, which will be available only at GameStop locations in the U.S. for $199.99 (MSRP). This premium package combines the highly anticipated title from legendary developer Hideo Kojima with a “Camouflage” PSP-3000 system, which was inspired by the Central American setting for the game.