Okay, so we now know that Sega's secret project, codenamed 'needlemouse', is Sonic 4. And now we know that Sonic 4 will be an old school flavored side-scroller with some beautifully rendered 3-D lite graphics. I like it- and I'm sure you do too if you're a Sonic fan. Actually, Sega probably couldn't have done better as a follow up to the (mostly) atrocious current-gen Sonic efforts. Or maybe they could have. 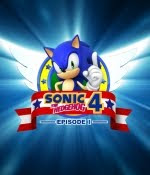 You see, Sonic 4 is a downloadable game. So the only way to get it is to buy it off of LIVE, PSN, or WiiWare. Why is this no good, you might ask. Maybe to you it isn't the case, but to me the downside of these types of games is that they almost never go on sale, there's no physical media (it's an issue for me), and they're tied to personal accounts which kills sharing.

This probably isn't a big deal to a lot of you out there- I'm just saying, I'd rather have a nice shiny new 'Sonic 4' boxed on my shelf than invisible on my Hard Drive.

Read on for the official press release-

SAN FRANCISCO & LONDON (February 4, 2010) –SEGA® of America, Inc. and SEGA® Europe Ltd. today announced the latest game from the world’s fastest hedgehog – Sonic the Hedgehog 4 Episode I. Available exclusively via download, Sonic the Hedgehog 4 Episode I (previously known as Project Needlemouse) will bring back the addictive side scrolling action that Sonic fans love in an all-new 2D adventure.

Sonic the Hedgehog 4 Episode I, the first Sonic game developed exclusively for download, brings back the adventure that Sonic fans have been waiting 16 years for. It will offer the classic Sonic moves that fans love including Spin Dash and Rolling Attack and will also feature Homing Attack, all in beautiful CG rendered environments. Packed with special stages, Sonic the Hedgehog 4 Episode I will take players through a variety of different Zones, inspired by the Genesis-era style. Longtime fans will not be disappointed as they face some intense boss battles against everyone’s favorite villain – the always devious and evil – Dr.Eggman.

“Sonic the Hedgehog 4 Episode I features the classic Sonic gameplay style that the community has been asking for since Sonic and Knuckles,” said Sean Ratcliffe, Vice President of Marketing, SEGA of America,Inc. “Thanks to emerging technologies, we are able to create all-new stunning Sonic worlds combined with Genesis-era Sonic gameplay and make it downloadable across multiple platforms.”

Sonic the Hedgehog 4 Episode I will be available in Summer 2010 for Xbox LIVE® Arcade for the Xbox 360® video game and entertainment system from Microsoft, PSN, and WiiWare™. For more information about Sonic the Hedgehog 4 Episode I, please visit www.sonicthehedgehog4.com. For assets, please visit the SEGA FTP site at http://segapr.segaamerica.com.
Posted by The Angry Spark at 10:53 AM