Pantheon Books, who'll be showing off The Girl With the Dragon Tattoo and Anne Rice's The Wolf Gift among other properties, will be giving out a load of freebies to fans stopping by their booth at the NYCC October 13-16.

Among the offerings are free panties that were quite the hit at the San Diego show. For the record, the undies are emblazoned with the Yiddish word 'unterzakhn'. Which means 'beneath the surface' or 'underwear' in English. It's to promote the book of the same name by Leela Corman. 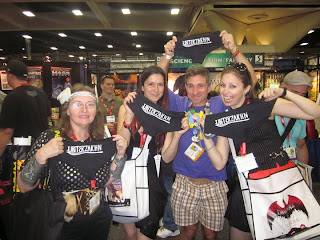 AUTHORS:
We have two authors joining us at our NYCC booth this year: Dash Shaw/BODYWORLD (Pantheon) and Colson Whitehead/ZONE ONE (Doubleday, going onsale 10/18). I would be happy to set up interviews for you with them in advance of or during the event. More information about Shaw and Whitehead may be found below and in the embedded links.

BOOKS:
WORD bookstore will be at our booth selling a healthy selection of Pantheon graphic novel favorites, including two of our biggest new releases by incredibly talented artists: Craig Thompson’s HABIBI (Pantheon, 9/7) and Art Spiegelman’s METAMAUS: Inside a Modern Classic, Maus (Pantheon, 10/4). These are destined to be Pantheon Books classics, so be sure to ask us about them at the booth. Buttons inspired by each title will be on hand for giveaway, as well, in addition to gorgeous posters (attached) specially designed by Craig Thompson for ComicCon. Also available for sale at the convention will be Glen Duncan’s THE LAST WEREWOLF (Knopf), a hit new novel that was all the rage in San Diego this past summer.

GIVEAWAYS & OTHER PERKS:
Of all the possible giveaways at ComicCon, I bet you’ve never received a pair of women’s panties. Nearly a year before its onsale date, UNTERZAKHN by Leela Corman (Schocken, going onsale 3/20/12) was already the hit of San Diego ComicCon in July, where we were giving out panties with the word “unterzakhn” (Yiddish for “beneath the surface,” aka “underwear”) on them. Robot6 and other blogs covered the unique giveaway item (see attached for pics from SDCC), and the panties will be handed out (in a limited quantity) throughout NYCC. Corman, who moonlights as a professional belly dancer, has illustrated books on subjects ranging from urban gardening to the history of the skirt, and her work has also appeared in the New York Times and on WNET/Thirteen. For more on Corman and the new book, go to http://leelacorman.com/.

Mystery freebies! Author of 31 books, Anne Rice’s latest THE WOLF GIFT (Knopf, out next year) will make an appearance in some sort of a giveaway item during the convention. www.annerice.com. Also having a presence at the booth is Ben Marcus’ THE FLAME ALPHABET (Knopf, 1/17/12), and the giveaway will be as unique as his startling new novel. http://benmarcus.com

Pose with Lisbeth! The spectacularly successful Stieg Larsson/THE GIRL WITH THE DRAGON TATTOO (Alfred A. Knopf) trilogy is coming to NYCC. This year at the Pantheon booth, you can pose next to a poster of Lisbeth Salander—the heart of Larsson’s novels.

Finally, NYCC is your exclusive chance to get a sneak peak at what Chris Ware has been working on (his next book with Pantheon, fall 2012). Stop by the booth to get your first glimpse.
Posted by The Angry Spark at 3:30 PM